Watch All 3 games at Cllick Here 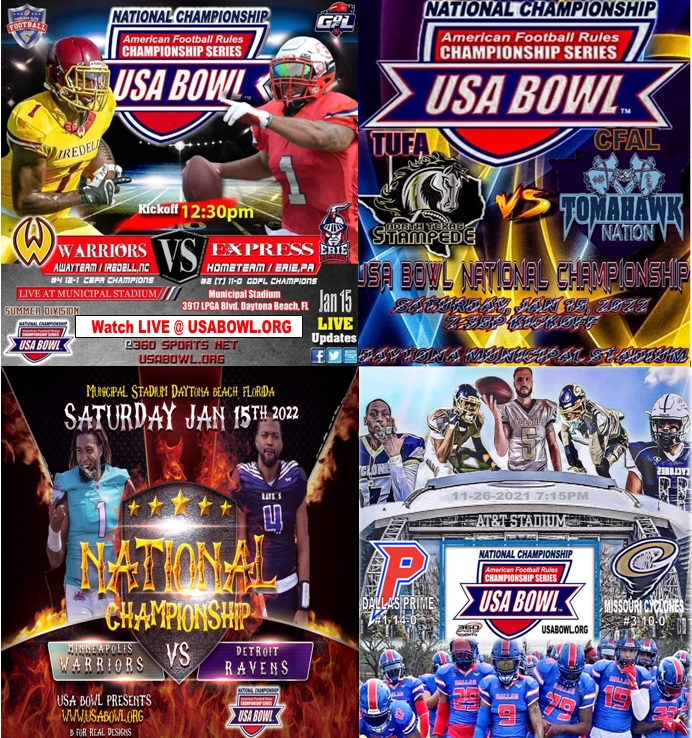 There are over 1200 Minor League/Semi Pro/Adult Amateur Football Teams in America. To qualify to play in a USA Bowl National Championship Event football teams must be willing to travel nationally, win their league championship, be defending national champions or win a minimum of 10 regular season games along with being nationally ranked in the American Football Rules Top 25 Poll. The games are sponsored in part by the Daytona Beach Convention and Visitors Bureau and 360 Sports.               www.usabowl.org     www.allamericanbowl.com

About the USA Bowl - American Football Rules USA Bowl Championship Series is designed to bring together the best of America’s minor league teams to play at the nation’s top travel destinations in a championship bowl setting.

Plaza Resort and Spa. On the Ocean,  Seabreeze Blvd Restaurant and Shopping District and Ocean Walk Shop All within a short walk to Restraints, Bars and Shopping, Standard Room-

Best Western Plus Daytona Inn Seabreeze is located just a couple buildings north of Plaza Resort and Spa.  Breakfast is included in the room rate and there is free parking and free wifi.  There is also an oceanfront pool and fitness center.

Holiday Inn & Suites on the Ocean is located just north of the Best Western Plus Daytona Inn Seabreeze next to the Hard Rock Hotel.   There is a restaurant, bar, oceanfront pool, fitness center, and outdoor games such as Jenga and corn hole.  There is free parking and free wifi.

to www.usabowl.org for the Streaming link! Stream will come up Satuday Morning.
360 Sports/Champs Sports will be Only group permitted to Live Streaming the games!
So send the link to your Fans at Home!
Streaming link: https://www.eventbrite.com/e/2022-usa-bowl-national-championships-daytona-fl-tickets-247321955627