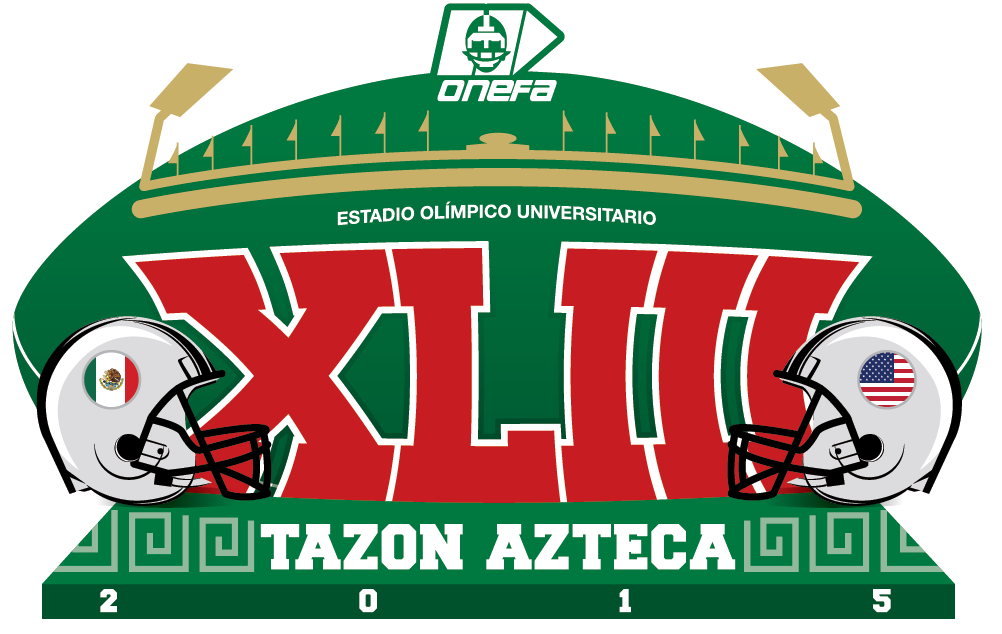 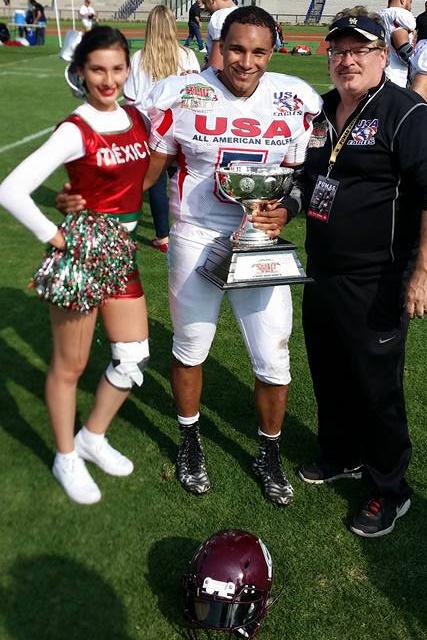 About the Game: The game will be played in Olympic Stadium Home of  the University of  Mexico Pumas  which holds forty two thousand fans, we are expect 30,000 fans. In 2011 the All American Eagles defeated the Mexican College All Stars 28-12 and 49-20 in 2012. 2014 Aztec Bowl in Chihuahua Final Score was USA 24 Mexico 21.  Team USA is Undifeated since 306 Sports took over bringing players to the Aztec Bowl. The Aztec Bowl is a college Division I/II/III (since 1973) post-season bowl game that has been played intermittently since at least 1954. With but one exception, all of the games have been played at locations in Mexico; the exception was the 1957 game played in San Antonio, Texas.

Listen to the Game on Champs Sports Network at
http://youtu.be/U-a35yegdn0
with HOst Matt Farago

You also may find video of the game at http://www.terra.com.mx/

The Team USA All American Eagles will play in the Aztec Bowl in Mexico City, Mexico.

360 Sports and the All American Bowl is proud to present this exciting opportunity  to showcase the United States top players in the 2015 Tazon Azteca Bowl.   Bowl History

The USA All American Eagles team will play in the Aztec Bowl against the Mexico National team December 5th in Mexico City , Mexico.

Players are responsible for you airline cost to Mexico City and getting a Passport!

1. Hotel accommodations in quality hotel, 2 players per room.
2. Airport transfers in quality coach buses and/or vans
3. All meals
4. Transport to and from practices in quality coach buses, with locker rooms, showers and meeting rooms
3. 2 Practices per day Wednesday – Thursday - Friday
4. Meeting rooms daily for staff and team in the hotel, offense and defense can meet separately.
5. Emergency medical services at the game; medical contact throughout the stay
6. Several Bilingual coordinator from Mexico to be with the team during all working hours.
7. Security personnel to be with our team 24/7
8. Vacation Tours: Half-day tours, visiting interesting sites in the area.
9.  Game Jersey, Game Pants

You must FIRST Register for this game.

Sponsor Fee: Sponsor Fee is $499,  We are discounting the Sponsor fee $299 to $200 to help players cover Flight coast to Mexico City.
Additionally when you register and pay the $200 your self, the Sponsor will be reimbusted once you get a sponsor.  Register Here
No fee for Coaches

Pass Port: You will need this, to travel to Mexico City.

WHERE IS THE GAME?  Olympic Stadium Mexico City, Mexico

ESTIMATED ATTENDANCE:  Mexico official estimate 30,000+ fans will be in attendance. At the Aztec Bowl in December the Eagles played in font of 15,300 Mexican Fans!

DO I NEED A PASSPORT?  Yes! You will be flying from your home directly to Mexico City, Mexico, you will picked up at the airport and taking directly to the Hotel (See Itinerary Below)

Note: We just came back from doing on a Coaching Clinic for Mexican College and High School Coaches at a High School in Mexico City and it was just as easy and safe as flying to New York City. Only additional thing is filling out paperwork on the airplane.

WHERE WILL WE BE STAYING: Mexico City,  Mexico

WHAT DO I NEED TO BRING: Helmet, Shoulder Pads, Pads, White Game Pants, Money for site seeing and fun food, cloths, camera. (Don't use your cell phone unless you contact your provider first)

HOW LONG WILL I BE IN MEXICO CITY?  5 Days 4 Nights Wednesday to Sunday

CAN I STAY LONGER?  Yes. Let us know you Itinerary

PURPOSE OF THE ALL AMERICAN BOWL Provide quality football and educational opportunities for the players. Opportunity for players to be scouted, No guarantees are made for which scouts will be in attendance. (NFL, UFL, CFL, AFL, AF2 etc.) See Notable Alumni

WHO CAN PLAY? College Seniors.  we will be only taking 42 players and 8 Coaches, so roster spots are limited for this once in a lifetime opportunity.

HOW DOES ONE GET SELECTED? The players have been recommended by their coaches and nominated by the All American Bowl Selection Committee and the Football Scouting Bureau. These select players are being recognized for their outstanding Division I/II/III and Free Agent Career.

WILL IT BE BROADCAST? Live Online Radio Stream (Play-by-Play and Commentary) Highlights of the game will also be posted. The media is invited to attend all practice sessions and social events. Media credentials can be obtained by contacting the All American Bowl at 575-322-2695 and leaving a message with your name, affiliation and phone number.

WILL THERE BE AWARDS GIVEN? Post Game: MVP for both teams 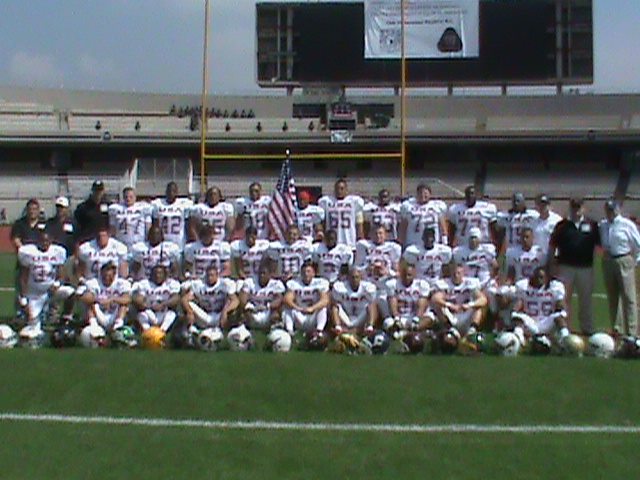 HOW ARE PLAYERS HOUSED?

*Times and dates are subject to change without notice

IS THERE A HOST HOTEL?  Yes

WHAT AIRPORT DO I FLY INTO IN Mexico City?   Benito Juárez International Airport

HOW CAN I GET TICKETS? ALL GENERAL ADMISSION AT THE STADIUM 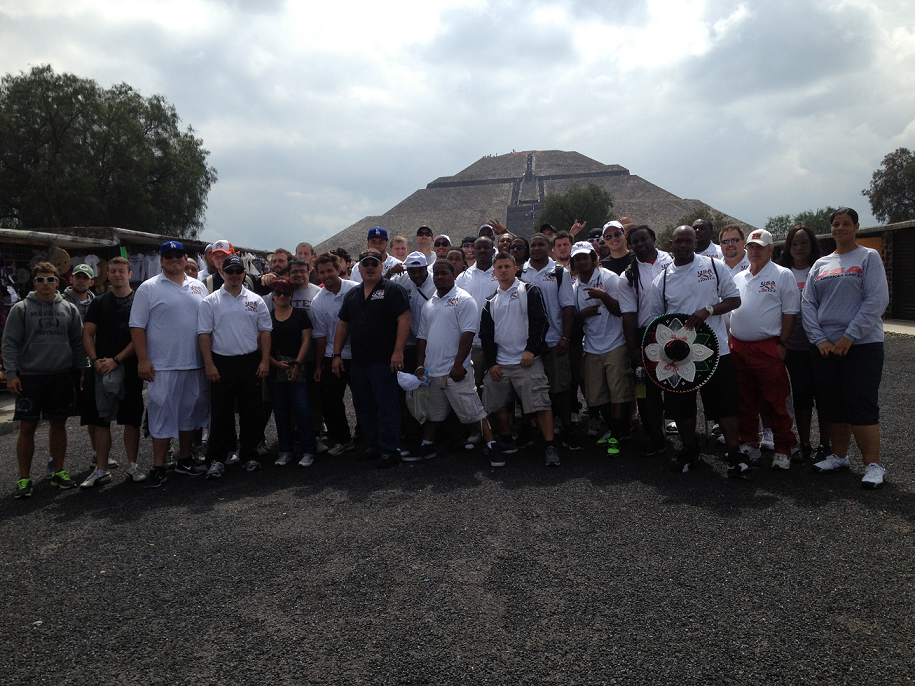 DO PLAYERS PAY TO PLAY IN THIS GAME? NO, Players are Sponsored.

Holiday Hotel (5 days-4 nights stay)
3 Meals per day, Tour of TBD
Local transportation to and from Hotel, Airport and Stadium.

FYI:  Check with the DMV or your State Department, but Passports can be expedited, for a up charge, if you have confirmed travel plans with in 30 days to Mexico!

WHAT IS THE TOUR LOCATION:  TBD

We have a New Hotel the other one was overbooked (Its Christmas time in Mexico!)
Make sure you tell fans who are coming!

Have a safe flight home!